According to some dudes the whole “seduction community” is actually not, like you might at first think, a bunch of creepy not-technically-rapists - they’re really virtuous freedom fighters, saving men and women from the evils of female privilege. You see, men are horribly oppressed when it comes to sex and dating. They need sex so, so bad and stupid women just refuse to give it to them when they ask! It’s terribly shocking, I know. Luckily we have these dudes who tell us how we can [follow the lead of Slick Rick]

and finally all get our dicks wet!

(Yeah, I know. Some men like men, some women like women. I hear ya people. The thing is, for these dudes homosexuals are invisible and bisexuals are just extra hot ladies.)

Here is how these guys seem to see the world, and why they think men have it so bad:

You might wonder why, given that the number of vagina-craving men and penis-craving women in the world are about equal, there is such a huge imbalance in the sweet, sweet loving that most people, presumably, want to have happen. I’ve read about what these guys believe is happening (and oh, how oppressive it is!) and it seems to boil down to the following “facts”:

So pick up “artists” use magic tricks to level the playing field. It seems to work by making women think you’re an asshole, but just the right kind of asshole for them; knowing what women want better than they do; applying your naturally rational male brain to turn human social interaction into a game you can win.

There are many problems with this belief system. First, it’s wrong. Second, you’re not entitled to shit from anyone. Third, you’re basically saying that you are so foul and un-bangable that you have to trick people into having sex with you. “Seduction” advocates, though, claim that it works for them and us pesky feminists simply refuse to tell them how to get laid! 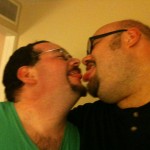 Okay, it’s not my job to tell you how to get laid. I’m a nice guy, though, and since you asked so nicely I will give you my own patented, fool-proof system for getting ladies to have sex with me:

There you have it. I assure you gentlemen, approximately 20% of the time, it works every time. And by following this system no one thinks you’re horrible! It’s really a win-win for everyone.