_ [This article was originally posted on August 29th, 2011 at Skeptic Freethought.]_ 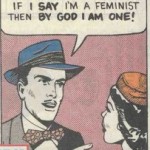 “Feminist” is a polarizing word. You’ll generally see it used in one of two ways: as self-identification by people who consider themselves feminists, and as a pejorative by people who do not.

It’s a word with an ugly connotation in many people’s minds, not unlike the word “atheist”; people hear the “-ist” suffix and infer an ideology that seeks feminine supremacy rather than gender equality, just as many see atheism as a rebellious denial of God rather than an affirmative acceptance of a godless universe.

To be sure, there are differing opinions among those who consider themselves feminists regarding what it means to be a feminist. There are disagreements about its implications regarding sexuality, marriage, reproductive rights, and parenting. There are disputes about what reforms are needed in modernized Western societies compared to developing nations. There are debates about who gets to call themselves feminists, particularly about whether this label can apply to men.

##Can men be feminists?

I call myself a feminist because I agree with the movement’s most basic tenet: women are people. I feel that throughout human history and in the status quo today, women have been and are either (a) regarded as lesser beings than men, or (b) propped up on a pedestal from which they are not permitted to descend, and often paradoxically both at the same time. I see this as wrong and would like to do my part to correct it.

As such, supporting fair treatment across gender lines means proactively questioning and reforming the way we (both men and women) think about women. For this reason I will use the word “feminist” and not try to make up some new, gender-neutral term for supporting gender equality.

I know that there are hardcore feminists out there who object to men calling themselves feminists. I understand their reasons for feeling that way (for example, men presumptuously thinking they can speak on behalf of feminism, men dominating discussions on feminism, and then there’s this guy).

I still feel that I should use the label, as it helps to make feminism less taboo, less scary to people who claim they oppose feminism without understanding what it means. An increase in the number of visible male feminists (or “pro-feminists” or “allies” if you prefer) will increase dialogue among men about their treatment of women, and increase the number of men who stop to think “Y’know, maybe I am being sexist without realizing it. I should reexamine my attitudes about gender roles.”

##Being visible among skeptics, or Wearing it proudly

At the SSA conference last month, I chose to wear my bright green “THIS IS WHAT A FEMINIST LOOKS LIKE” t-shirt, bought years ago from a fundraiser for a battered women’s shelter.

[caption id=“attachment_601” align=“aligncenter” width=“300” caption=“I don’t always wear t-shirts with slogans on them, but when I do I support equal treatment of women."] 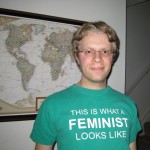 I’ll admit that I knew I wasn’t going out on a limb with this: I knew that there were many feminists among the population of young atheists and agnostics. It got positive reactions from feminist atheist bloggers Jen McCreight and Greta Christina, and it turned out there were even a few other male feminists there as well.

In proclaiming myself as a feminist, just as happened when I proclaimed myself an atheist, I am bound to make both friends (not all of whom I’d like to call “friend”) and enemies (some of whom I have no quarrel with) based solely on the label.

Case in point: one of the Marxist activists present at the conference seemed to assume I’d be sympathetic to her group’s ideology based on my self-identification as a feminist. I was not.

I’m not aware of any animosity toward me regarding the shirt (I’ve experienced such from male acquaintances in the past), but I have to wonder if it frightened anyone away. I would certainly hope not.

I will echo the sentiments of atheists who have found the AAFHSS community to have a detectable sexism problem, if based solely on what I’ve read in the blogosphere (I personally heard no such comments at the SSA conference). I do suspect, however, that many groups and social movements have the same problem, if not a more deeply embedded one; the difference is that there are outspoken feminists in the secular movement who recognize sexism when it rears its ugly head and call people out on it.

I also will ask that any men who feel threatened by feminism take a serious second look at their attitudes toward women. Are you afraid of becoming a second class citizen, or are you afraid of losing special privileges you’ve become accustomed to? Are you afraid that values associated with your gender will someday no longer be the default?

I won’t tell other skeptics and freethinkers that they should get behind a particular ideology, but I will ask them to consider what they do believe about sex and gender and examine the evidence on which they base their views (even feminists should do this – any idea worth believing is worth scrutinizing). You may find that you hold biases you weren’t aware of.