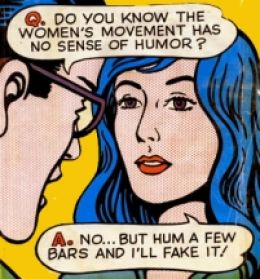 I’ll give Rush Limbaugh one thing, he’s good at meme-generation. Though he says his friend at the Cato institute coined the word, “feminazi” sure has caught on over the last 20 years. “Feminazi” is, of course a ridiculous auto-Godwinning slur to throw around but it represents something much more widespread: the fact that the straw feminist is what so many people see as the “real” feminist.

It’s an old joke that anything someone says that follows " I’m not a racist, but…" is always going to be horribly racist. How often do you hear people, especially women say “I’m not a feminist, but…” and then say something that is, frankly, feminist? When did being a feminist become the moral equivalent, in some people’s minds, of racism and homophobia? What’s next? “I don’t hate feminists, some of my best friends are feminists.”

Why have anti-feminist forces been so successful in the last few decades at demonizing the movement for female equality? Should feminists copy liberals and come up with or re-purpose another word? In a world where feminism is “the f-word”, what is the value in labeling ourselves as feminists?