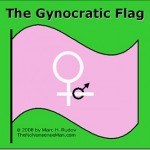 MRAs, anti-feminists, and general dudebros are fond of responding to feminists and just-not-horrible people (especially women) by whining making strongly worded claims of misandry. Inspired by the amazing How To Be A Reverse-Racist: An Actual Step by Step List For Oppressing White People by A. D. Song and Mia McKenzie I’ve created this handy guide to using the inherently unfair (to men) system to create a gynocratic fempire that I would like to call Misandria.

[Trigger Warning for a list of sarcastic, but graphic ways in which one gender has treated another over the centuries.]

Men are valuable property. An important first step is to make sure that women can control men. Create social customs and laws to ensure that mothers and sisters retain ownership over the men in their families. Create complicated legal transactions for transferring ownership of all men to other families to use for breeding stock, sexual playthings, and free domestic labor. This ensures that women are free to run society without having to worry about the essentials.

If men are able to express and act on their sexuality without limits it will destroy the traditional family unit and unbalance society. Teach boys from an early age that they’re bad if they feel sexual desire. Teach them that their bodies are shameful . If men have a sexual life outside of the limits enforced by women they should be free of the protections that good boys get. When possible men who take ownership of their bodies and sexuality should be sexually and physically assaulted as a warning to other men to toe the line. If that isn’t possible they should be shamed and shunned in society. Make it clear that their transgression of the norm is what caused any bad thing that happens to them. It’s vitally important that this be taught from an early age because that way boys will internalize it and help police other boys and men. Men want the approval of women so women need to make it clear that men who treat their bodies and sexuality as their own are disgusting – then they can do half your work for you.

If at all possible (and since women run things, why not?) minimize and eliminate men’s access to advanced education. Make it a law if you want. Why do men need any skills and knowledge beyond maintaining the home, anyway? During what education you allow for men, be sure to teach boys that things like science, math, and other challenging and important subjects are unmanly. Make it clear that “common sense” dictates that men pursue education only in fields that are not highly valued by society. If the occasional man gets an advanced degree it’s best that they be artists or poets - something we can dismiss as sentimental and frivolous and masculine.

Men should be at home supporting their families. Sometimes, though, stubborn men will try and work outside the home. They can be humored to a point, but make sure they are in fields that mimic the duties they should be performing at home. If that dumb cock wants out of domestic and child care work make sure he’s working in a position that is subservient to a woman. No one wants to take orders from a man. Whatever job a man has make sure it doesn’t pay as much as a woman earns. Women need to provide for their families and we all know that men are sentimental and will not work as hard or as long as a woman because they long to be with their children.

The fact that women are able to invent things and create business empires relies upon the unpaid child care and domestic work of their men at home. In order to help maintain this it’s important to downplay, obscure, and whenever possible erase any work done by men outside the home. Our history books and our news should focus on the work of women. If men’s achievements are widely known and celebrated it might cause young men to question our social order and then their children will be poorly parented which will contribute to social decay. For the most part steps 3 and 4 make this a small problem, but it does happen. If you absolutely cannot find out how a woman can take credit for a man’s work make sure that you stress how feminine the unnaturally accomplished man is. Make sure people know he’s an outlier. When talking about his work talk about if he’s handsome, ask him about his wife, discuss his children. Remind people what that those are the important parts of a man’s life and work.

Men are slaves to their hormones. They have way more testosterone than women and that makes it hard for them to participate in calm, rational discourse. They’re basically like impulsive children and should be treated as such. When a man challenges a woman about something you should tell him to calm down and stop being so emotional. Men’s complicated emotional landscape and bizarre and alien sexuality (see step 2) should be constantly pointed out. Women are simple. Everyone understands women, especially because their needs are of primary importance in society. Make sure everyone, especially boys, know that men are just different and weird and kind of sad and disgusting. Men’s bodies are strange and disgusting (I mean how can you trust something that ejects its vital genetic material from it’s own body during sex!), male “logic” is convoluted and silly, and since men are so alien from what normal female people are like they can’t ever be trusted or respected.

One of the most important things you can do to oppress men is create a climate where men are never able to feel safe from sexual objectification, assault, and rape. Women have strong sex drives and men are more interested in emotional bonds. (See step 2.) Always make sure that men know that what women think of their appearance is the most important thing about them. (See step 5.) Make sure that TV, film, and all other media routinely feature men as sexual objects and rewards for the heroine of the story. Whenever describing a man talk in detail about his appearance and fuckability. No one wants to look at an ugly, feminine man. When you see a man you think is attractive, let him know - constantly! Make it normal for women to take what they want from men. Always make it obvious that if the man didn’t want it he wouldn’t have dressed like that, gotten drunk like that, been in that neighborhood. Make sure people know that women have needs and men need to satisfy them to be well liked. If a woman does something over the line that just makes her adventurous - girls will be girls. When a man acuses a woman of something that no one can deny was rape, the first thought should be how seriously we should take him. It’s just his word against hers. She probably has a lot more to lose than he does. She has a career and a family. Everyone knows men lie and he’s probably just trying to profit from this anyway. Besides, why would anyone want to fuck someone that looked like him?