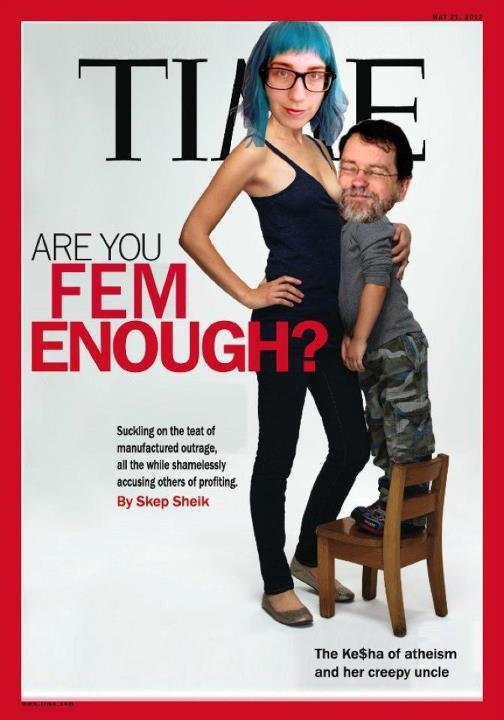 Coffee Loving Skeptic, who seems to want desperately to be Rebecca Watson’s bête noire posted this super hilarious(ly badly Photoshopped) image on his Facebook wall. What I find really interesting, and telling, and instructive here is that the picture is obviously intended to cause offense and outrage in the targeted people, Ms. Watson and PZ Myers. In the image, calculated for outrage, he accuses his victims of profitting from “manufactured outrage”.

We’ve seen this charge before, that Watson, myself, and all other not horrible skeptical bloggers are making mountains of molehills. We’re looking to be offended where no “normal” person would take offense. We’re accused of bullying, we’re criticized for blocking people who badger us online.

It’s the #FTBullies hashtag all over again. It’s the bullies denying their bullying as they bully. “Pay no attention to the insults I hurl at these people, and ask yourself why they are so upset?” It is absurd, and they are either too stupid to realize what they’re doing or they think everyone else is too stupid to notice it.

For extra icing on the cake, I give you the two images below. I commented, making the point I make in this post. Mr. CLS didn’t like what I had to say, and deleted my comment, while adding some dismissive bullying of a woman. I suspect he thinks you’re all too stupid to realize what he (and his allies in hate) are doing, and was afraid my comment would spoil the sweet scam they have going on. 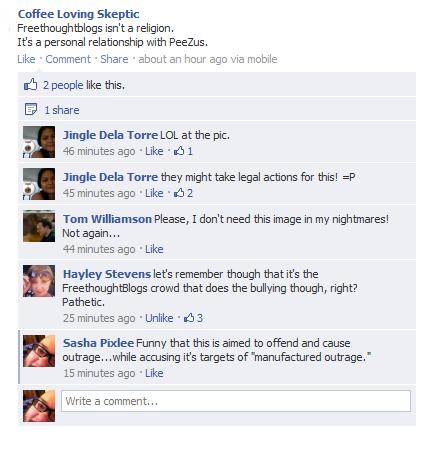