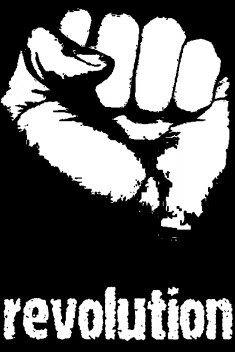 For some, skeptical atheism took a turn for the revolutionary this weekend. There’s a mood in the air that had me write an earlier draft of this post. Then Jen McCreight beat me to it with her brilliant post calling for a new wave of atheism. Ophelia Benson, Jason Thibaeult, and Greta Christina soon blogged their support. Jen followed up with a crowd sourced name for this new wave and a report that grassroots support is, at the moment, growing. You can add my voice to that chorus.

Skepticism is, at it’s core, merely a way of knowing. A set of tools we use to cut away assumptions, misinformation, and myth to get as close as possible to objective truth. Skepticism and science are how we know that homeopathy doesn’t work. Atheism is a truth claim. For most atheist it’s merely a statement of what we believe is the most reasonable position to hold based on available evidence. Some atheists merely reject theism because it offends them for other reasons, but myself and most atheists I know arrived at our conclusions regarding god by using skepticism. For this reason the two are linked for many, many people.

But skepticism and atheism don’t say what we should do with the truths we have uncovered. Skepticism lets us know that homeopathy is bunk but it doesn’t have any real say in what we do with that knowledge. Being a skeptic doesn’t mean there’s any reason (if your world view is limited to skepticism alone) not to be a homeopathic practitioner and knowingly defraud sick people. Those of us in “movement” skepticism have generally made a moral decision that it’s wrong to defraud people using myths and pseudoscience. That’s not a value we have arrived at because of skepticism, it’s one that we have because of our moral compasses. Similarly atheists usually fight against religiously-based fraud and criminality. We do this not because we’re atheists, because saying there’s no god doesn’t automatically get you a set of values, we do this because we are humans with a sense of morality that reviles abuses of power, especially when that power is gained by false claims of supernatural authority.

When people talk about how attention paid to economic, sexual, and racial inequality is “mission drift”, my response is that skepticism and atheism has been “drifting” from the start. As long as there have been skeptics and atheists many or most of those skeptics and atheists have chosen to make the world a better place. An application of skeptical reasoning and an awareness of the fictional nature of religion make us uniquely suited to see the injustices of the world for what they are, if we will open our eyes to see. Some of us are willing to see more than others. Some of us respond to the theist’s question of “What do atheists have to live for?” by saying “We live to make the world a better place.”

There is a complacent group within our movement that is on board with consumer protection and social justice so long as it benefits them and doesn’t make them question their place in the world. Skeptics who question the claims of psychics but not the claims of libertarian economists. Atheists who passionately defend their rights to not be discriminated against but do little or nothing to stop the discrimination against people who are not like them. Some of these skeptics and atheists are angered to the point of obsessive stalking, bullying, stalking, and threats of rape or death against people who want them to examine the parts of the world that benefit them in order to help others.

What is the point of being able to discern the truth if you don’t use it? What is the point of knowing the truth is you do nothing with that knowledge? As an atheist I know there is no supernatural plan for life. Our lives are what we make of them. I want to use my life to work toward making this one lifetime better, and more fair for everyone. Many of you agree. So how do we do that? It’s not enough to simply declare our principles and therefore differentiate ourselves from the reactionaries. We need to be revolutionaries.

Some of us have begun leading the way. Surly Amy is working tirelessly to bring women into skepticism. Melody Hensley has started the Women in Secularism conferences. Debbie Goddard has started African Americans for Humanism. We need more of this. We need to work actively to create a diverse movement where everyone has a voice regardless of gender, sexual orientation, race, or ability. We need to work to understand the unique situations everyone faces and learn how skepticism and atheism can help. We need to not wait for people to join us on our terms, we need to change our terms as we learn more things about the diversity of human experience and need.

We know who is on which side. We know which people, organizations and events share our values and which ones are stuck in the past, pandering to wealthy libertarians and ignoring the needs of the rest of the world. We know which people and events support diversity and want to help save the world. When we are not creating new events and groups we need to support those groups that share our values and we need to boycott those that do not.

Yes, I said boycott. When Rebecca Watson said she didn’t plan on buying any more of Dawkins’s books,& the cry of “She’s ordering a boycott!” came from the throat of thousands of trolls. First, she didn’t call for or order anything. She just said what she intended to do. And secondly, why not? We should all boycott those organizations, events, writers, and speakers who oppose our values. I’ve been doing it for years. Penn Jillette’s outspoken misogyny means he gets none of my money. There are many other examples I could give, but I am sure you have a list in your head already. Start your boycott today.

This is how we win the new wave of skeptical atheism. We speak out, we organize, we use our feet and our dollars to vote for what we value and against those mired in the past. We need to be revolutionaries or we will accomplish nothing.