I don’t know about you, but sometimes caring publicly about equality and making a point of being visibly not-horrible can sometimes be exhausting and demoralizing. The relentless and obsessive attacks on people, especially women, who speak out against misogyny and hate really fuck with my head. I’ve struggled with depression my whole life and it’s pretty triggering for me. Many is the evening or weekend I spend holed-up at home because I’m just sick of the world and everyone in it. No wonder some of us need to quit. 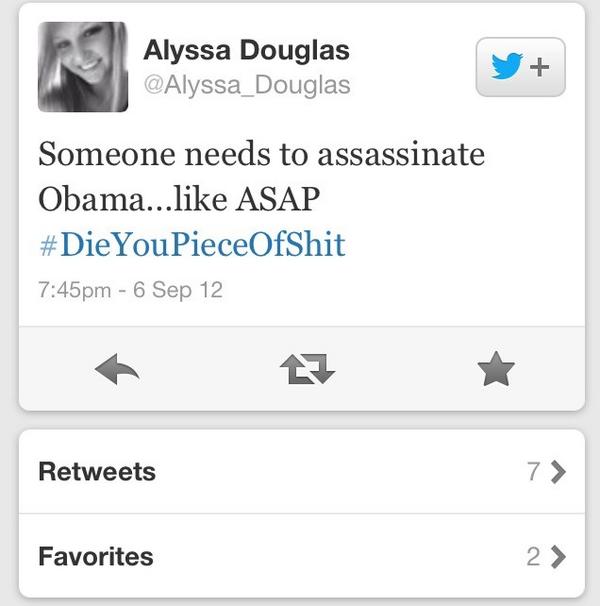 Last night, right after watching Barack Obama accept his party’s nomination for president I saw a tweet that was pretty vile. I took a screenshot and tweeted it with my usual sarcastic fatalism. You can see it to the right. But then I thought about it while talking to a friend.

You know what? Those people are losing. Not only is Obama president, but most people who see that recognize ir for the piece of vile garbage it is. There is still a shit-load of racism in this country, but we also have an African-America president who is running for his second term, and most of the racists who hate him feel the need to claim they’re not actually racists. (Though they are.)

Rick Santorum hates gay people. He compares their relationships to bestiality. He thinks they are harmful to children. He’s a disgusting homophobe. But you know what? He realizes he can’t admit his homophobia. He invented “gay friends” who support him.

And you see it amongst the misogynist skeptics and atheists who are relentlessly attacking and stalking any woman who questions the status quo on sex and gender in the community. These people play by the same woman-hater’s playbook used by the anti-suffragists, but they know one new thing for sure: they can never admit that they hate women. Pointing out what their words and actions show about their views on women is just about the worst thing you can do to them. Why? Because deep inside their cramped, paranoid little hearts they understand that sexism is wrong. Racism is wrong. Homophobia is wrong. They try to spin us pointing out the obvious as bigotry, but the world knows there a world of difference between intolerance and a stand against intolerance.

The tide was turned for us before now. The tide is with us. These people are losing as they scurry to hide their hearts from the world. That realization has me feeling more optimism than I have had in weeks.