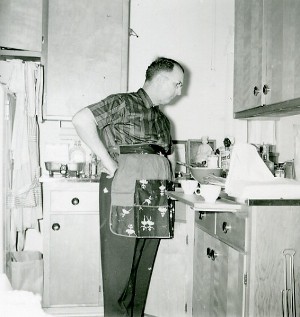 A friend posted a link to this article on Slate about a married man with no kids who is a homemaker. I loved the article. Due, in no small part, to the fact that this very well could have been how my life ended up. At one point in my life I was a physics major dating a chemical engineer - pretty clear who was going to be earning the big bucks there. While I only remember pieces of specific conversation, I do remember talking about multiple times. I married a woman who has a passion for what she does, but unlike the engineering major ex I’m definitely the primary breadwinner.

I’ve never really had much use for gender roles: I’m the primary cook of the house (one of my favorite pastimes is baking), I do a moderate amount of cleaning (although admittedly my standard of clean is much lower than my wife’s) and I’ve been known to paint my nails. Not some goth shade of black mind you – we’re talking bright red, deep blue or purple. Sometimes glitter is involved. It’s no wonder that I was drawn to Skepticism - I’ve never much cared for how I’m “supposed” to do things. I’d rather bake cookies, do an art project, play with my kitten or help take care of the horses than watch football. One of the most fascinating things to me about this movement is how vehement skeptics can be in their criticism of other’s beliefs and yet be completely blind to areas of their life where they’ve swallowed societal norms hook, line and sinker.

So it should be no surprise that I in envy the author. Not because his wife makes tons of money, but rather I envy the choice that her income gives them. My wife and I have incredibly busy lives and it’s hard sometimes just to find time together when one or both of us aren’t totally exhausted. I admire the author’s courage to be a “stay at home dude” regardless of the bullshit opinions others might hold about his domestic situation. I admire his commitment to the relationship and his willingness maximize his happiness, both as an individual an a couple, via non-conventional means. Mr. Boulding understands something beautiful – only you can determine what’s best for you. Bravo sir.