I’m a single guy who uses OkCupid to meet people, occasionally to hilarious effect. I also have a lot of women friends who date online and run in to guys who are pretty horrible. It also turns out that not everyone, male or female, is super skilled at spotting misogyny warning signs. That got me thinking ,which now got you this post.

A lot of these might seem really obvious, but in my experience these red flags are sometimes missed because when we’re looking for romance or sex online we’re often trying to see the best in people because we know that expressing yourself through a profile can be hard. It’s also true that many of these don’t necessarily mean the guy is a creep, but it’s a good idea to proceed with caution when things like this crop up.

What this guy is saying here is: “I really hate it when chicks are super picky and only date dudes they find attractive and appealing. Also, your job is a boner-killer.” It’s also quite possible that when he says he wants someone who brings out the “bad boy” side of a man he’s interested in freaky sex with questionable consent. Or he really, really wants to cuddle while watching Will Smith and Martin Lawrence together.

Quality real estate ladies! This particular guy hasn’t been contacted on the site in almost a week, so it doesn’t seem like he has many passionate and ambitious beauties asking for his really warm gifts. This reads like a Nice Guy trying to act like a confident person, i.e. a jerk, because he thinks that’s what women want.

I happen to have gone on some dates with women who are younger than I am. Dating people who are younger (or older) than you isn’t a sign of misogyny in itself. What is a huge warning sign is a dude who makes a big point about wanting someone who is much younger than he is. This guy wants to make sure that all those beautiful, tawny young women aren’t afraid that a sophisticated older man is afraid to be their mentor. That kind of creepfest and the dudes who are, say, 49 years old and list the women they’re interested in as being aged 18-48 are telling us that they are intimidated by a woman they would consider a peer and they feel more comfortable dating younger hotties that they have objectified to the point that they can’t imagine them as people with opinions and feelings and self esteem that would make them uncomfortable. It’s also very possible that these men are resentful for missing out on all the crazy sex with co-eds they imaging they missed out on in high school and college and they feel like they’re entitled to get to screw those young women now. 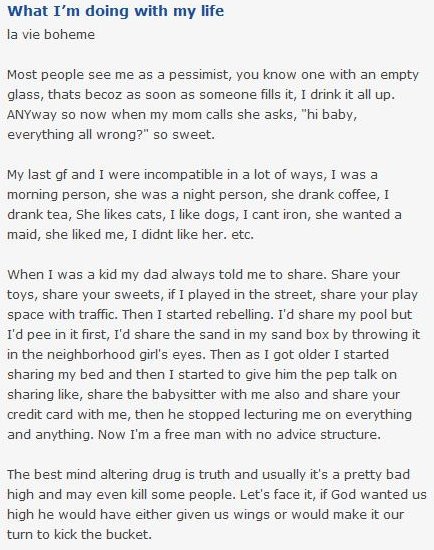 Misogynists like to ramble. They think they’re the smartest, funniest, and most clever people around. They also think that it’s super relevant that their ex girlfriend was a castrating bitch and that they hate sharing. Also, what’s with the incoherent rant about truth and drugs (I think?) at the end. Is he warning us that he lies to us for our own good?

One of the things I love about OkCupid is the ability to see how people have answered the match questions. I don’t communicate with women who believe that the earth is larger than the sun or that creationism should be taught in schools. Here we have a biblical literalist. I have yet to meet a biblical literalist who doesn’t hate women.

Rushing in to a relationship is a textbook red flag for abusive relationships. Pressure for commitment (moving in, engagement, marriage, children) early on in a relationship is basically the norm for an abuser. Perhaps it’s not the case for this guy, but it’s definitely something to watch out for. And trust me, marrying someone you haven’t slept with is rushing it and is stupid even if you don’t marry an abuser.

I’m sure you all get this one, right? Slut shaming and dictating a woman’s behavior as your number one priority while introducing yourself is something that sexist shitlords do. Don’t date this guy, he is horrible.

Racism and misogyny often walk hand in hand, and even if this guy isn’t a misogynist, just think what other horrible personality defects he has to go with his racism. 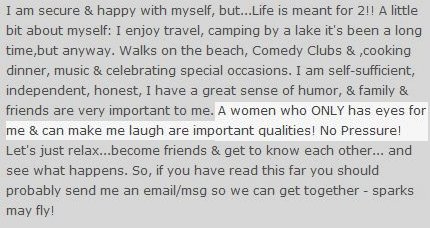 I’m an insecure and jealous assbag! No pressure! I think we all know he will look at other women, but he wants a woman who never looks at another man. Misogynists often fail to realize that women have sex drives just like men do.

Racism and misogyny are frequent companions but homophobia and misogyny are life partners. Homophobia always comes with a base layer of misogyny. Men who hate men who suck dick never have high opinions of the women they want to have sucking theirs.

So, there are the first ten warning signs I found cruising around OkCupid. Have you found any choice examples of your own?